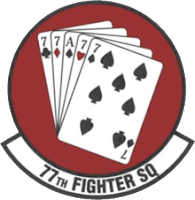 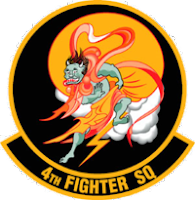 6 feet 4 inches tall and 230 lbs. is awfully big for a fighter pilot, especially when you realize that those cockpits were designed for men no bigger than 5' 10" and 160 lbs, but Ernie Fieblekorn, (Feeb or Red to his friends) always wanted to be a fighter pilot. Accepted for the Aviation Cadet Program in 1942 he repeatedly turned down offers that would have put him in a bomber. He had skill though and raw talent that got him known as a "hot pilot". He graduated at the top of his class and was assigned in 1944 to the 20th Fighter Group in England. He did not have an auspicious start. Assigned first to the 79th Fighter Squandron, he was grounded several times and almost court marshaled for his antics. Supposedly one involved flying through a hanger.


The 79th, did not want him anymore and his flying career would have been over except that the Commanding Officer of the 77th Squadron was looking for a hot pilot and felt that he could control Feeb's enthusiasm. It turned out to be the perfect match. Fiebelkorn took advantage of this final chance and settled down. He started racking up victories. On 8 Nov 1944 he and another pilot ganged up on Col. Walter Nowotny, a top Luftwaffe Ace with 258 victories. their P-51 Mustangs were outmatched by Nowotny's Me-262 jet, Feeb hit him high and Lt. Hayden hit him low. At the last minute, before landing Nowotny spun into the ground and was killed on impact. 20 days later, on a sweep over Germany, Feeb downed four German fighters on one mission, three Me-109's and one FW-190. Having completed 100 missions, destroying 11 enemy aircraft,  receipt of two Silver Stars and two Distinguished Service Crosses before his 22nd birthday, Feeb went home to Pontiac Michigan with his new wife for Christmas 1944. While home on leave, he learned of the death of his 19 year old brother during the Battle of the Bulge. His brother Roger, a Private in the 100th Infantry Division had been awarded the Silver Star for his gallantry.


He did not return to Europe but stayed in the US as an instructor pilot. After the war, Feeb stayed in the Air Force until 1947. Bored with routine duties he left in January. By the middle of the year he was miserable. A hot pilot on the ground is a sad sight to behold. In mid summer, he looked up one of his old ground crew, a bartender in NY's Astor hotel. Over a beer, he poured out his heart. Former Sgt. Trynosky listened and told him that few in this life have the chance to do what they want and the skills to keep doing it. By Sept. he was back in uniform at Mitchell Field L.I.


The outbreak of the Korean war, June 25th 1950 found Feeb in Japan flying F-82 twin Mustangs in the 4th fighter Squadron. The North Korean invasion, backed by the Soviet Union and their superlative T-34 tank was  rolling over the US and South Korean forces. All available US assets went to Korea. On 6 July, 1950 Capt. Fiebelkorn led a four plane element on a hunt for North Korean tanks who were threatening an American unit. Unable to see through the overcast, he let his aircraft down to see if he could get below it. Nothing was heard from him again. Two years later the bodies of Capt. Fiebelkorn and his RIO were found in the wreckage of their F-82 on a mountainside about 40 miles north of Seoul. Captain Fiebelkorn, 27 years old, father of a three year old son, the hot pilot, became the first American pilot to die in the Korean War. He received another DFC for his actions that day and was buried with full military honors in Arlington National Cemetery.


This post was originally prepared as part of the 2012 Memorial Day Presentation for BSA Troop 27 sponsored by St. Catharine's Church in Glen Rock, of the former Ridgewood-Glen Rock Council.
Posted by Unknown at 11:10 PM No comments:


70 years ago today the SS Normandie, pride of the French Line, burned and capsized in NY harbor. Originally feared to be German sabotage it turned out to be poor safety habits among welders.

On the same day, Nick and Paula Trynosky were married. For the rest of his life, when asked how long he had been married my Dad, demonstrating the greenhorn (my Mothers words) that he was would answer something to the effect, “February 9th, 1942,, the day the Normandie burned, I had a choice of marrying Paula or going to see the ship burn.” Paula was never particularly happy with this. 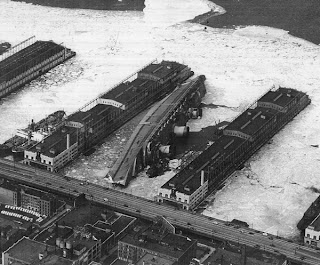 Something to be remembered.

Posted by Unknown at 8:23 AM No comments:

This is a test post from the new computer at Trynosky HQ... stand by for future updates.
Posted by SKTrynosky at 3:32 PM No comments:

Email ThisBlogThis!Share to TwitterShare to FacebookShare to Pinterest
Labels: stupid

Some video from Acceptance Day at the Merchant Marine Academy. As I think I mentioned before, this is the day when the Plebe Candidates are formally accepted into the regiment, and take their Oath of Office United States Maritime Service, and United States Naval Reserve. It's one of the bigger milestones of Plebe year, there are some additional perks granted, and the class is let out of school on liberty for the first time. The next big milestone is Recognition, where the 4th Class is recognized by the rest of the regiment, and they are no longer plebes.

Amazingly, the first minute or so of the video is the most fascinating part for me. The reason being it's a few moments of footage of the plebe class photo being taken. This large panoramic photo has been on my wall at my parents house, my apartment after graduation, and my house for almost 12 years. For some reason it was like stepping into a time machine to see video of the photo being taken.

We had a copy of the USMMA Beat Retreat from 2000. This performance took place on Sept 15th, this was the Beat Retreat scheduled for parents weekend and Acceptance Day, when the Plebe Class is accepted into the Regiment of Midshipmen.

I performed in eight of these events while I was at the academy, the best ones were always the parents weekend performances, as they also featured the Nassau County Police Pipe and Drum Corps, with the third act being a great performance of both the Regimental Band from the academy, and the Pipe band together.

Posted is the first segment, I'll come back and edit this post later when I get the second segment up tomorrow night. The transfer cut out during the fundraising speech by the Academies Public Affairs Officer at the time, Capt. Safarik.

and now the second part...

This is really just the last act with a few speeches thrown in. It features the Academy Band playing together with the Pipers, and what was always my favorite part of the show, and great arrangement of Highland Cathedral.

I transferred a few home videos of the 99 and 2001 Beat Retreats last night as well, and I'll post them at some point. Its mostly just bits and pieces though, not the nice professional recording I am able to share here.
Posted by Unknown at 11:48 PM No comments:

Here is my father's baby picture.


Inexplicably, Gregory Peck was also in the frame that this photo came from. I suppose they sold frames with pictures of famous actor's back in the day. That's probably a lot better than random people, my guess is that licensing fees and the SAG are the reasons this is no longer done.